Home » Mario Draghi lays out his legacy for Italy, Europe, and the West 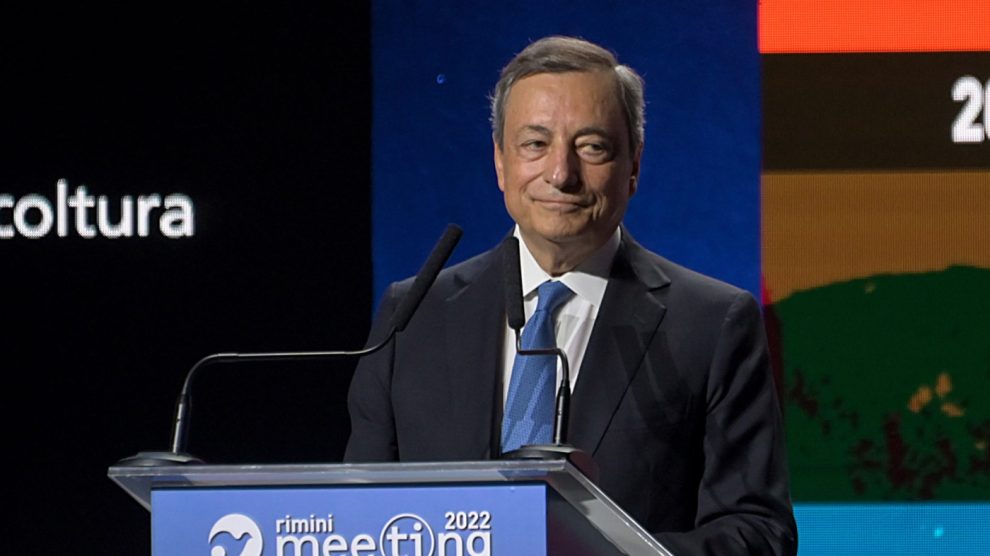 At the Rimini Meeting, as election day closes in, the outgoing Italian PM touches on today’s driving issues – war, energy, the economy and international relations – and outlines how to address them. He and President Mattarella also marked Ukraine’s Independence Day by assuring Italy’s steadfast support

Sounds like a farewell. “Italy is a great country that has everything it needs to face difficulties.” As he addressed the crowd at Rimini’s Meeting (a key platform featuring most of Italy’s political leaders), Mario Draghi gave one of his last speeches as sitting Italian Prime Minister. And he sought to leave the audience – and by extension, Italians – with a renewed faith in themselves.

The outgoing PM also touched upon the most pressing issues the country, its next government and its allies will face soon. Here’s a selection of his takes.

On protectionism. “Domestic credibility must go hand in hand with international credibility. Italy is a founding country of the EU, a protagonist of the G7 and Nato […] Protectionism and isolationism do not coincide with our national interest, he said, recalling the “autarkic illusions of the last century.”

On the economy. “Today we are in an extremely challenging moment for Italy and the EU. The geopolitical picture is changing rapidly due to the return of war and tensions over Taiwan. The economic situation is marked by deep uncertainty” and inflation “weighs heavily on the budgets of families and businesses.”

On capping gas prices. The price of methane has reached “unsustainable levels,” peaking at over ten times the historical value. “Italy has pushed hard at the EU level for a cap on gas prices […] Some countries continue to oppose this because they fear supply blocks. However, the frequent blockages in Russian gas supplies this summer have shown the limits of this position.”

On reducing Russian dependence. “Last year, about 40% of our gas imports came from Russia. Today, on average, it’s about half that […] Italy will be able to become completely independent from Russian gas as of autumn 2024.”

Italy calls Ukraine. To mark Ukraine’s Independence Day, PM Draghi sent a video message to President Volodymyr Zelensky. “Our government has provided and will continue to provide you with political, financial, military and humanitarian support. We want to help you to defend yourselves, to achieve lasting peace, under the terms you deem acceptable.”

Passing on the torch. The two leaders’ messaging definitely sounds like an appeal, addressed to Italy’s next government – a call to remain steadily on the Euro-Atlantic tracks that they laid out. Especially given that some likely members of the next government – namely, the League’s Matteo Salvini – have been urging to “rethink” Russian sanctions.