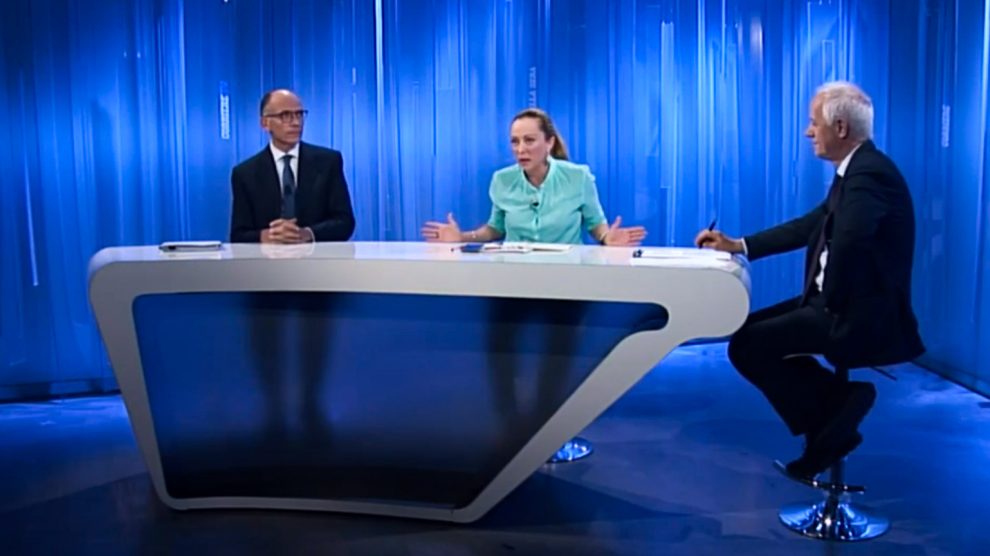 The leaders of the centre-left and centre-right coalitions squared off in the only face-to-face discussion of the ongoing electoral campaign. We reached out to Professors Campi (History of Political Doctrines, University of Perugia) and Ignazi (Political Sciences, University of Bologna) for a flash analysis

Enrico Letta v Giorgia Meloni. On Monday night, the two political leaders squared off in the only face-to-face debate of the ongoing political campaign, on Corriere TV. As polls have it, both lead their coalition – centre-right and centre-left – and the other political leaders, making this the closest Italian equivalent to a US-style electoral debate.

On Ukraine and sanctions. The first question centred on the resolve within the two coalitions to support Kyiv, given that minor parties in both fields have opposed sending more weapons. Both reiterated that their parties – the Democratic Party and Brothers of Italy – will continue standing by the Ukrainian resistance and that an eventual government led by them would maintain this stance and uphold sanctions.

On Europe and integration. Ms Meloni noted that her conservative coalition abided by the principle of subsidiarity, i.e. “don’t let Brussels do what Rome can best take care of. Don’t let Rome alone take care of what it alone cannot solve.” She pictured a more assertive Italy on the European stage, keen on protecting its national interests.

Expert takeaway / 1. Professor Alessandro Campi (History of Political Doctrines, University of Perugia) noted that Mr Letta’s attempts to put Ms Meloni on the spot “fell flat.” Given that polls indicate BoI’s probable victory, Mr Campi argues that the DP is “betting on damage control” and “waiting for the next government to implode and get back into the game, out of necessity.

Expert takeaway / 2. Professor Piero Ignazi (Political Sciences, University of Bologna), perceived a nationalistic tack on Ms Meloni’s part, centring on national interests and perhaps classical sovereignism ideology, which is risky, as he argued. “It’s a long-term trend. Ms Meloni’s powdering of European issues is very superficial: it only took a gust of air to send it away.”