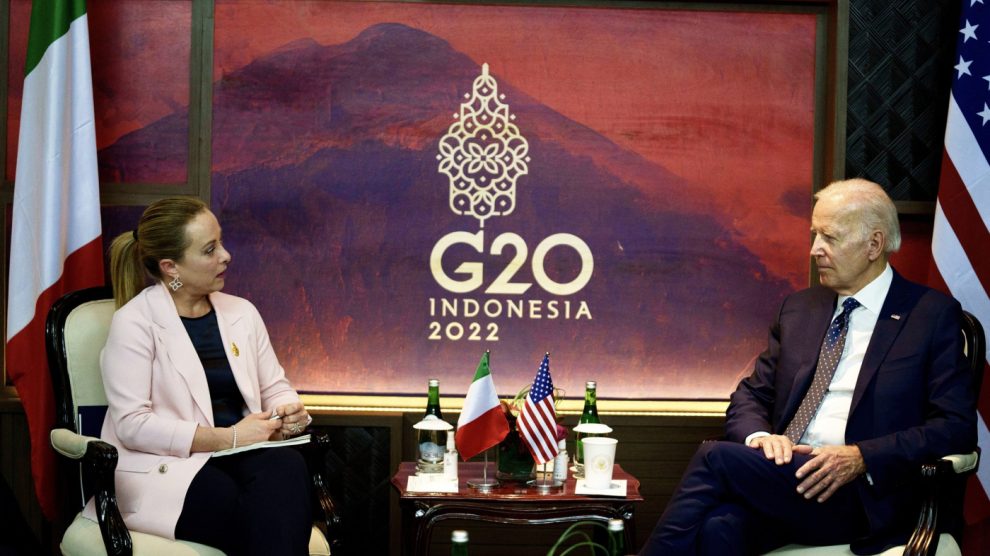 The first in-person meeting between the two leaders confirmed Rome and Washington’s alignment across the board. They envisioned expanding cooperation on security, the economy and countering China: here’s what they talked about

The Biden-Meloni meeting. On Tuesday, the President of the United States met with Italian Prime Minister Giorgia Meloni on the sidelines of the G20 Summit in Bali, Indonesia. The hour-long conversation was Mr Biden’s first chance to confer in person with Ms Meloni since she took office in October.

Italy’s version. “The conversation focused on the solidity of the Transatlantic Alliance and the excellent cooperation to meet global challenges, from economic growth to common security,” notes the Italian readout.

The US version. “President Biden met today with Prime Minister Meloni of Italy on the margins of the G20 Summit in Bali to coordinate responses to a range of global challenges, including those posed by the People’s Republic of China, the climate crisis, and Russia’s use of energy as a weapon,” reads the White House note.

Read and compare. The Italian press release highlights PM Meloni’s emphasis on the soundness of the transatlantic alliance, even in light of the positions of her allies Matteo Salvini and Silvio Berlusconi on the war in Ukraine and sanctions on Russia – as she did before, a way of neutering their influence.

Coming up: China. Ms Meloni will meet Mr Xi on Wednesday, but don’t expect much warmth. On the eve of Italy’s elections in September, the Italian PM said that she would not renew the Belt and Road Memorandum of Understanding between Rome and Beijing (which was signed in 2019 and is expected to expire in March 2024) and expressed support for Taiwan.

Italy at the G20: a comprehensive round-up
Migrants: French-Italian quarrel stalls as Macron and Mattarella talk