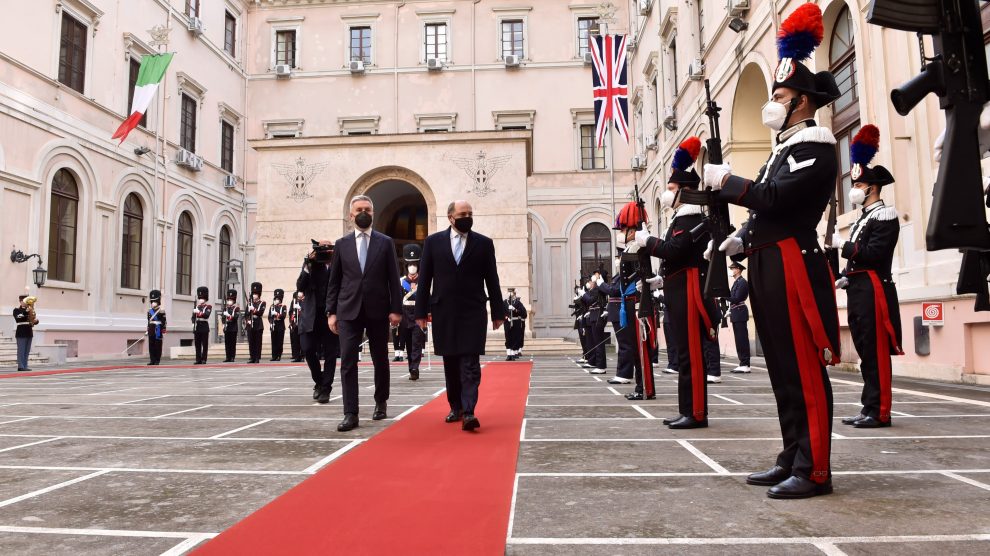 The British and Italian Defence Ministers met and discussed industrial cooperation among other issues. The IAI's Marrone explains why Rome and London can be complementary actors between the wider Mediterranean and the Indo-Pacific areas

The year 2021 will go down in history as very positive for relations between Italy and the United Kingdom. The former chaired the G20, the latter chaired the G7. Together they worked on the organisation of COP26. And together they are working on a bilateral cooperation agreement.

It will “consolidate our relations, our collaboration, the dialogues we have launched,” said Jill Morris, British Ambassador to Italy, some months ago in front of the Italian Chamber of Deputies. The diplomat, who is poised to leave her 5-year post in Rome in a few weeks, added that the goal was to “create together a structure to deepen our relations, for the good of all our citizens, after 2021 and in the future.”

“I have no doubt that in the future Italy and the UK will remain allies and friends. We are two countries that have the opportunity and the responsibility – not limited to this year of presidencies – to lead the international community towards a more prosperous, more resilient, more sustainable and more inclusive future,” she explained back then.

A common thread in the relationship between the two countries is Defence, both in political and industrial terms. Recently, while NATO and its Industry Forum were meeting in Rome, Defence Minister Lorenzo Guerini saw his British counterpart, Ben Wallace. The meeting followed those held on September 15 in London and June 11 in Augusta, onboard the HMS Queen Elizabeth aircraft carrier in Sicily; it was an opportunity to take stock of the international situation, bilateral cooperation and collaboration in the defence industry.

During their talks, the pair paid great attention to Europe’s eastern flank and the threats from Russia (a priority for the British Defence): the two ministers underscored the need to avoid situations that increase tension on the borders of Ukraine and Belarus and that for a very firm response to provocations, which are coming from friendly and allied countries on that side.

The two also discussed the NATO mission in Iraq, over which Italy will take command in 2022, the Mediterranean (including the situation in Libya) and Afghanistan. Minister Guerini underlined “Italy’s historic interest in stabilising the Middle East, an area of strategic interest not only at the national level but for European and transatlantic security too.”

During the conversation, the two reiterated the significant level of understanding that has been reached in industrial cooperation, which “must remain at the centre of our relationship, given the promising opportunities it offers for the respective industrial sectors, increasing synergies at the operational level,” as Minister Guerini remarked. “Italy and the UK have a long tradition of cooperation in the defence sector and work together on important cooperation programs, beginning with the Tempest [fighter jet],” he added.

The latter is a collaboration where the two countries share the commitment on an equal basis. “I believe it fundamental to strengthen the cooperation within the defence industry between our countries, through a balanced sharing of technologies and know-how, in order to make the Tempest into the new reference model for the aerospace industry and for future international collaborations,” specified the Italian minister.

In July 2020, at the Farnborough show (albeit a digital version), the industries of the UK, Italy and Sweden formally launched a joint working group. Major aerospace companies participating from each country, including BAE Systems, Leonardo UK, Rolls Royce and MBDA UK for London; Leonardo, Elettronica, Avio Aero and MBDA Italy for Rome; Saab and GKN Aerospace Sweden for Stockholm. The industrial understanding resulted from the path mapped out by the respective governments during 2019, with two different declarations of intent between London and Rome, and between London and Stockholm, which led to last December’s memorandum.

“Current tense relations between the EU and the UK on issues such as fisheries and finance do not seem to involve Italy all that much,” said Alessandro Marrone, head of the Defence Programme at the International Affairs Institute (IAI), a Rome-based think tank. This, he added, is one of the two elements that characterise the relationship between the two countries in the post-Brexit phase, with the second being “Italy’s position, which is both Atlanticist and Europeanist, and thus halfway between the UK and France. Italy approves of the EU strategic autonomy, which France is strenuously pushing towards, but as long as it remains compatible with the NATO framework.”

“At this stage, however, there is a political question mark” in the relationship between Italy and the UK, as the former “remains strongly oriented towards the wider Mediterranean area and is not moving towards the Indo-Pacific – at present, at least.” Whereas the latter is following the US into that area, he explained. “You only have to look at the AUKUS Agreement and the Integrated Review, which is heavily oriented east of Suez.”

“In this sense, the journey of the HMS Queen Elizabeth is symbolic: it departed from Portsmouth, passed through the Mediterranean and arrived in the Indo-Pacific,” continued Mr Marrone, observing that “for sure Italy and the UK are both committed to Europe’s collective defence, but Rome cannot misread the British reality and consider the UK to be significantly engaged in the wider Mediterranean. There can be dialogue and complementarity between Rome and London, but beyond Europe, the geopolitical priorities are largely different.”

However, the expert explained that “major capability plans span across long-term interests linked to an international context that is moving towards great power competition rather than counterinsurgency.” And in this scenario of defence and deterrence needs, “the Tempest program fits perfectly. Particularly within NATO’s planning, which is reorienting towards multi-domain and high-end operations.” Additionally, it “has a very solid base in Anglo-Italian industrial collaboration. Unlike the F-35, where US leadership is preeminent, the Tempest entails a kind of closer consultation and cooperation that involves Italy and Sweden alongside the UK, which is the project’s engine.”

Innovation between Italy and the UAE. Di Maio flies to Dubai (after DefSec Austin)
NATO in Rome: the Draghi-Stoltenberg meeting and the Industry Forum