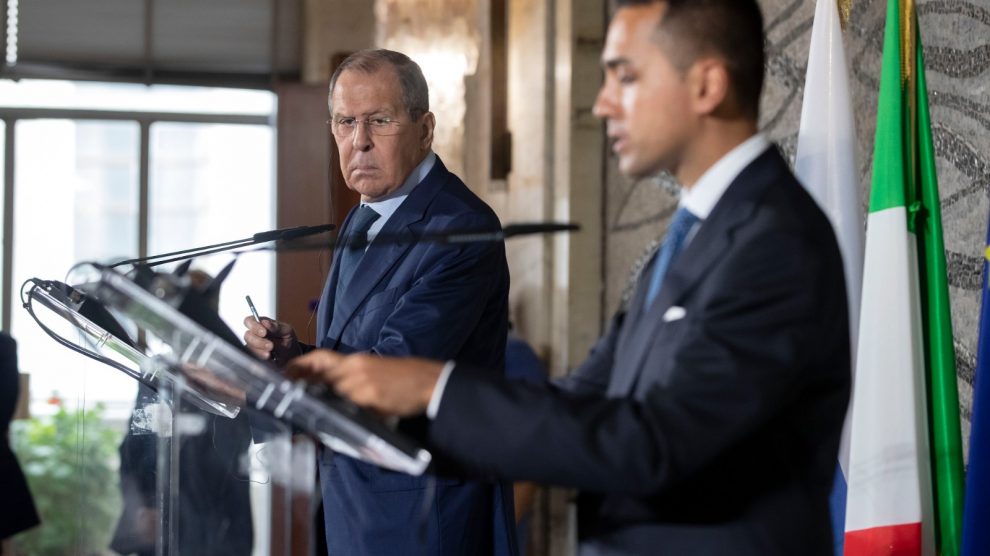 On Wednesday, Russian Foreign Minister Sergey Lavrov opened a 45-minute long press conference after the meeting with his Italian counterpart, Luigi Di Maio. The former spoke about trade between the two countries and gave the figures for 2021.

“Last year we registered an increase of about 50% in our exchanges. I want to recall the recent video conference meeting between President [Vladimir] Putin and Italian companies,” he said, citing a rather controversial episode in Italy.

Rome’s Foreign Ministry had distanced itself from that event, while the government had started a moral suasion process with public participation. Some members of COPASIR (Parliament’s intelligence watchdog) had expressed worries, in light of the risk that big business could weaken Italian policy, and therefore EU and transatlantic stances, towards Russia, while the Ukrainian crisis unfolded.

According to Mr Lavrov, the work of the intergovernmental committee for economic issues between Italy and Russia will soon “resume at full speed […] During the pandemic period this exchange mechanism was not very active,” he added, while “now we would like to reactivate intergovernmental consultations as well.”

The words of Moscow’s head of diplomacy sounded like a warning to Rome: Western sanctions imposed on Russia would deal a hard blow to the Italian economy.

Reading into the Russia line

Mr Lavrov further clarified his words shortly afterwards, in an interview that deserves to be recounted. The RAI (Italian State TV) correspondent in Moscow asked two questions. One to Mr Di Maio: “What would Italy do in case of further sanctions against Russia?” The other to the Russian FM, about the “evidence” of Russian withdrawal that NATO says is missing.

Before leaving the floor to his counterpart, the host intervened to say: “finally, a normal question: very concise, brief.” And after letting Mr Di Maio explain the Italian position – known to all: “we are working for a diplomatic solution and a diplomatic solution means avoiding any kind of sanctions” – Mr Lavrov took the floor and answered that same question as follows: “sanctions cannot be launched if at least one country is against them (…) I do not believe that Italy is interested in fomenting tensions.”

In other words, Moscow — which “very much appreciates Italy’s role in multilateral dialogue at the international level,” he explained — hopes that Rome will veto the sanctions, if push comes to shove.

Towards a Putin-Zelensky meeting

At the presser, the two ministers confirmed that Italy and Russia were working towards a meeting in Moscow between Prime Minister Mario Draghi and President Putin, to be held “as soon as possible,” said Mr Di Maio. “In light of what I was told on Tuesday in Kiyv by Minister [Dmytro] Kuleba and today by [Mr] Lavrov, there is readiness on both sides to find a diplomatic solution.”

This was confirmed a few hours later, at the end of the informal European Council on the Ukrainian crisis. “Now the goal is to get Russian President Vladimir Putin and Ukrainian President Volodymyr Zelensky to sit at the table,” said PM Draghi, having spoken on the phone with the latter on Wednesday.

“Italy is doing all it can to support this drive,” added the Italian PM before confirming he’ll fly to Moscow “in the coming days.” He also warned Russia: “at the moment, episodes of de-escalation on the ground have not been seen.”

The Italian FM continued: “Italy has been, and will always be, the country of dialogue.” While “hoping that it will not be necessary,” the country is still ready “to participate in deterrence mechanisms with our European partners and allies in the event of an escalation of the Ukrainian crisis.”

“We want to support the ongoing negotiations, both in the Normandy Format and between NATO and Russia, and between the US and Russia on the broader European security architecture,” explained Mr Di Maio.

He then added that Rome is working to ensure that the NATO-Russia Council is fundamental to overcoming the European security crisis. “We agree that a fully functioning NATO-Russia Council can be an important place to reach a solution, which is in the interest of all.”

Russia sees “continuity” in Italy’s work on multilateral cooperation, starting in 2002, when dialogue between Moscow and NATO was established at Pratica di Mare thanks to the Rome Declaration, said Mr Lavrov, noting that Mr Di Maio’s visit to Russia “helped to continue the exchange of views.”

During the long presser, The Russian FM also had the opportunity to send a few barbs towards the West. Here’s a question from the Russian press: “in your opinion, do the Western partners intend in any way to apologise or deny their assertions that are not absolutely true about the Russian invasion?” His answer: “I don’t think they intend to apologise.”

Again, on the subject of Western “lies” about the Russian invasion of Ukraine: “there are those who spread these lies. There are others who follow out of solidarity.” Perhaps this was another invitation to Italy to distance itself from its allies.

Finally: “NATO is doing the things of which it accuses us,” said Mr Lavrov, referring to the statements the Atlantic Alliance defence ministers had published on Wednesday evening. Here is Moscow’s accusation: NATO is strengthening its military presence near Russian borders.

His accusations were answered at a distance by British FM Liz Truss, who had a tense confrontation with Mr Lavrov last week (which the Russian likened to “talking to a deaf person”). “The reports on alleged unusual military activities by Ukraine in the Donbas are a blatant attempt by the Russian government to fabricate pretexts for invasion,” she wrote on Twitter. “This is straight out of the Kremlin’s playbook. The UK will continue to denounce Russia’s disinformation campaign.”

This tweet was also echoed by Richard Moore, chief of the UK’s Secret Intelligence Service (MI6), as if to confirm London’s confidence in the work of Western intelligence agencies, which have said that an invasion could “essentially happen at any time,” in the words of Jake Sullivan, US national security adviser.

Italy, a hidden cornerstone of NATO defence
How Italy (and the EU) is reducing its Russian gas dependency