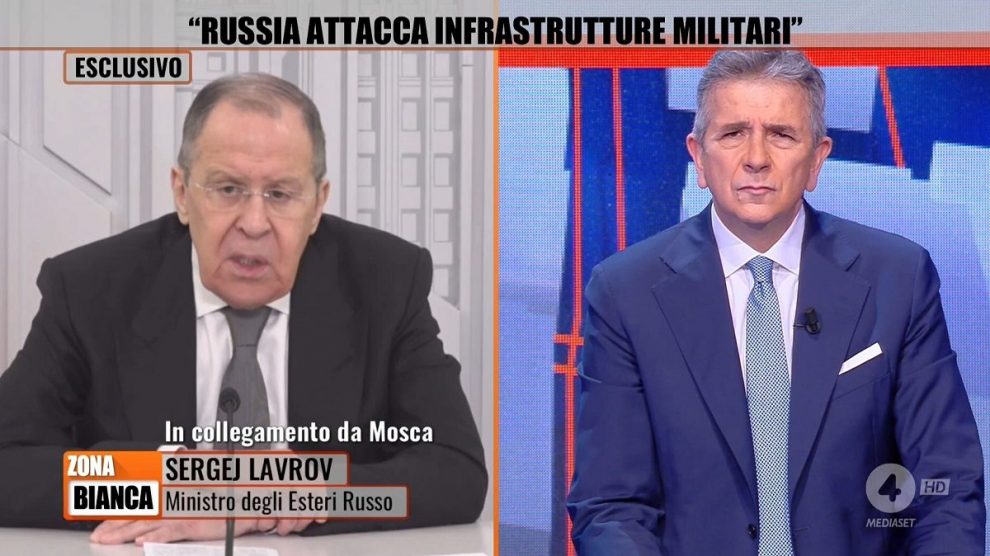 Speaking to the Italian public on Sunday evening, the Russian FM knew that the presenter’s softball questions wouldn’t have stood in the way of his falsehoods

The Kremlin channel. On Sunday evening, Russian Foreign Minister Sergey Lavrov was interviewed live on Italian TV – namely on Zona Bianca, a talk show on Mediaset-operated Rete 4 – in his first apparition on European TV since the invasion began.

But that wasn’t journalism. The 40-minute exchange between Mr Lavrov and the presenter, which aired during prime time, essentially consisted of the former blurting out Kremlin talking points, which oscillated between the nonsensical and the extremist, with the latter letting him speak uncontested.

Conspiracies & doublespeak. Here’s a selection of the Russian FM’s most disturbing and outlandish claims. They are all rigorously unsupported by facts or evidence, and they fly directly in the face of what happened since February 24.

Playing it safe. Arguably, Mr Lavrov chose the right setting for his televised propaganda spectacle, knowing full well that the presenter wouldn’t have given him a hard time. Since the beginning of the war, Italian talk shows have been a hotbed of manifestly pro-Russian misinformation.

Why did it happen? Setting aside the historical and cultural ties between Rome and Moscow, which explain only partly the overt Russophilia of some Italians, a years-long barrage of Russian and anti-establishment disinformation primed a portion of the Italian audience to be receptive to the Kremlin’s narrations.

Fighting back. Mr Borghi stressed that the information battlefield is crucial and that COPASIR works daily to counter it. The watchdog has announced it will hold auditions with the heads of Italy’s public television service, RAI, and the communications authority AGCOM.