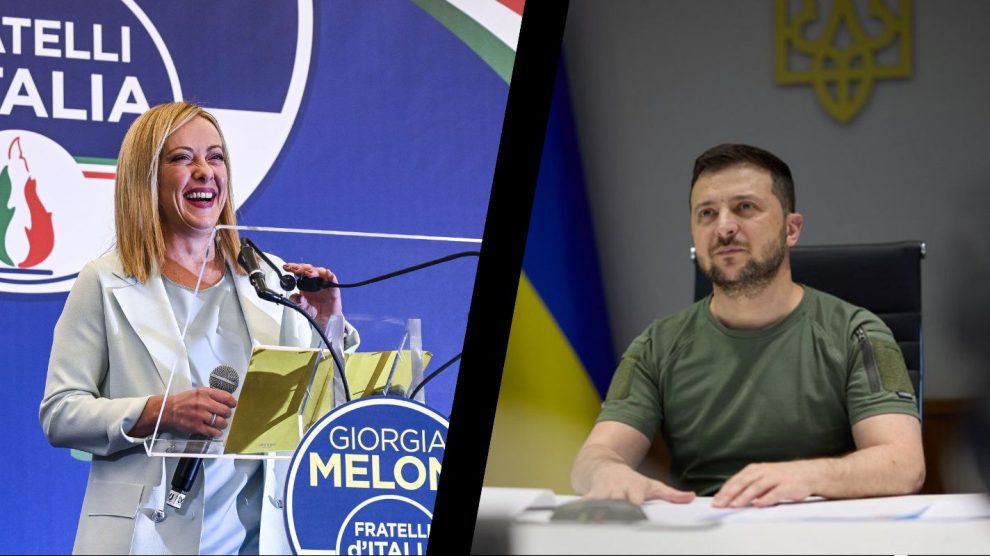 “We appreciate Italy’s continued support for Ukraine in the fight against Russian aggression,” wrote the Ukrainian president, who is counting on a “fruitful cooperation with the new government.” The PM-hopeful’s response: “you can count on our loyal support.”

Zelensky’s kudos. On Tuesday evening, the Ukrainian President tweeted in Italian and Ukrainian to congratulate Giorgia Meloni and her party, Brothers of Italy, on their electoral victory.

Meloni’s promise. The likeliest next Italian Prime Minister answered in English. “Dear Zelensky, you know that you can count on our loyal support for the cause of freedom of [the] Ukrainian people. Stay strong and keep your faith steadfast!” wrote Ms Meloni.

Look at the groundwork. The mutual show of support did not come as a surprise. In early September, the BoI senator and party heavyweight Adolfo Urso travelled to Kyiv to reiterate “Italy’s full support for the Ukrainian resistance, also on behalf of the president of Brothers of Italy, Giorgia Meloni.”

And the US side. Mr Urso then made his way to Washington, where he reinforced local contacts and discussed BoI’s position on Ukraine. And on Wednesday, Secretary of State Antony Blinken tweeted that “we are eager to work with Italy’s government on our shared goals: supporting a free and independent Ukraine, respecting human rights, and building a sustainable economic future. Italy is a vital ally, strong democracy, and valued partner.”

Meanwhile, Russia is none too happy with the result. Vito Petrocelli, an outgoing senator who was expelled from the Five Star Movement for supporting the invasion of Ukraine, appeared on the Russian State agency Ria Novosti’s website in an article titled “Italy unlikely to change sanctions policy against Russia.”

“No Italian sovereignty in political and military alliances. The economic and social crisis will lead to another government of broad agreements: the responsibility of everyone and, therefore, of no one. A real scourge for Italy” wrote Mr Petrocelli on Twitter.