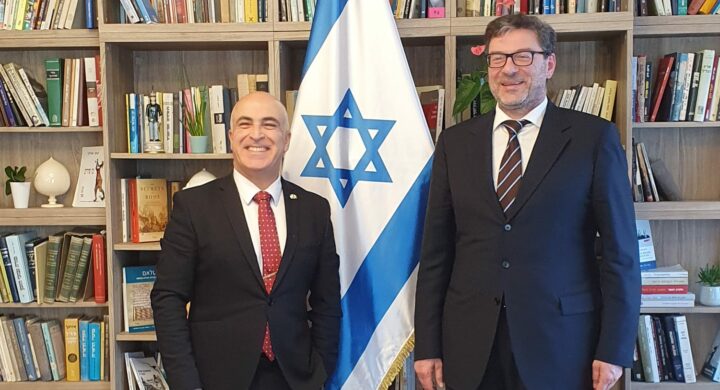 The Italian minister for Economic Development and the Israeli ambassador to Italy met on Monday. They talked of strengthening the industrial ties and the 500 million, 2,000 jobs-bearing Italian investment of an Israeli company, Tower Semiconductor

On Monday Giancarlo Giorgetti, Italian Minister of Economic Development and second-in-command of the League, met Dror Eydar, Israeli ambassador to Italy, for a discussion both parties called “fruitful.” They also touched on the possibility of the former travelling to Israel in the future.

The talks were meant to strengthen the industrial ties between the two countries, often defined as complementary at the industrial level, as well as allies in defence. This is supported by the various joint exercises with F-35 fighter jets, the fifth-generation aircrafts built with Leonardo and the M-346 training aircraft of the same Italian company (which, among other things, are part of a massive defence agreement between Israel and Greece).

The two talked about the future of the automotive industry, subsidies for Israeli investors and cooperation in the space sector, explained Ambassador Eydar. They zeroed in on the plans of one Israeli company, Tower Semiconductor, which produces silicon wafers for microchip devices on behalf of third parties.

In June 2021, Tower Semiconductors joined forces with the French-Italian group STMicroelectronics by signing an agreement, under which the latter will host the former’s operations in its site in Lombardy, specifically Agrate Brianza, to accelerate the growth of production activities.

The discussion hinges on a roughly 500 million euro investment and 2,000 potential jobs. The Israeli company’s top management was in Italy at the end of November to meet with Guido Guidesi, the Lombardy Region’s councillor for economic development, and a few members of the government, including Mr Giorgetti, who has always been described as being very much in tune with Prime Minister Mario Draghi.

In line with his French counterpart Bruno Le Maire, Minister Giorgetti is a firm believer in the European Union’s need to curb the rules for State aid so as to encourage investments and defend technological sovereignty, which is of great interest for the sector’s companies willing to invest in Italy, such as Israel’s Tower Semiconductor, but also the US’ Intel.

Messrs Giorgetti and Eydar also talked of a prospective May conference in Italy with several Israeli technology companies in the agriculture, food and water sectors. And perhaps the key topic in Italy’s current political scene – the election of the head of State – popped up during the talks.

In 2018, President Sergio Mattarella received in Rome his counterpart Reuven Rivlin (who left his post to Isaac Herzog in July). And he has been to Israel twice in his capacity as president: first in October-November 2016, then in January 2020 on the 75 anniversary of the liberation of Auschwitz-Birkenau.

The election of the next president might carry repercussions for Italy’s institutional composition. PM Draghi, who may or may not end up taking the job, commands the widest majority in contemporary Italian history; the future of the government, if not the future government, depends on who ends up in the top seat.

Intelligence and State. A conversation with the head of the Italian intel watchdog
The Italian strategy behind ransomware response