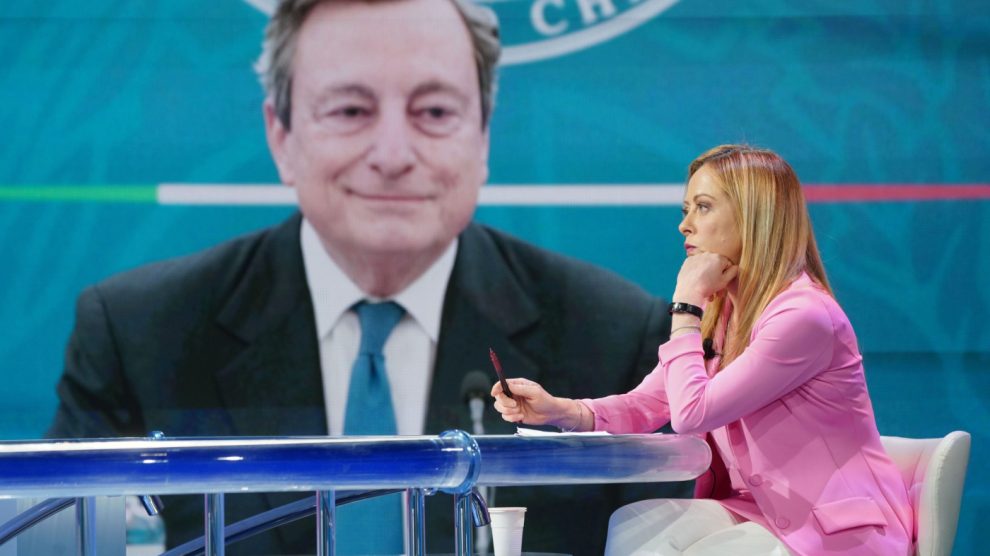 The likeliest next PM is seeking a soft, market-reassuring transition. A road that leads back to the outgoing PM and his team, which she’d like to tap for the fast-approaching budget law deadline. Military aid to Ukraine looks like a foregone conclusion

No time to party. Giorgia Meloni and her party celebrated their electoral victory with haste and moderation, knowing full well the towering challenge that comes with it. First off, a skyrocketing cost-of-living crisis and the need to address it, while creating a governing team that will stand the test of time and be suited to the international scenario.

Hitting the ground running. President Sergio Mattarella will play a key role in the handover between the Draghi government and the future Meloni government. For the first time in Republican history, such a transition happens during the budget session. All while an extremely negative economic outlook heralds an epoch of stagnation bordering on recession.

Military aid: a (likely) go-ahead. Given the urgency, President Mattarella, PM Draghi and Ms Meloni are already engaging on key dossiers: weapons to Ukraine and the budget law.

Economy: unexpected collaboration. Mr Draghi’s team is updating the budget’s financial snapshot, and Ms Meloni, too, is “delving into it” – according to what Brothers of Italy stated on Monday. The party is also hoping that the outgoing government will provide “a framework” on which to base the Finance Bill.

Weathering the storm. The situation is clear for everyone to see: inflation and low growth will eat into revenues and inflate bills as the country faces what has been called the most challenging winter since the postwar period. Add in Italy’s debt rate and the EU funds it’s receiving through its National Recovery and Resilience Plan, and the incentive to rock the boat as little as possible – by cooperating with PM Draghi’s team – becomes even clearer.

The Salvini wild card in the future Meloni government
The reformist or Italy’s AOC. Who will be the next leader of the Italian Dems?