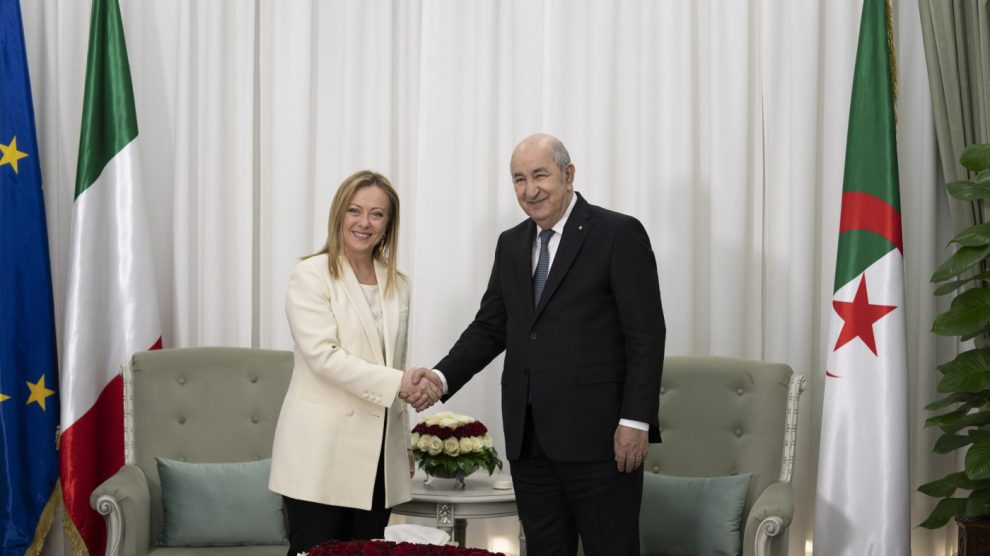 PM Meloni and President Tebboune signed several agreements, ranging from energy – a new undersea pipeline linking the two countries – to space and industrial cooperation. And Eni’s Descalzi confirmed that Rome will do away with Moscow’s energy by 2025

Italy to Algeria. On Sunday, as we anticipated, Italian Prime Minister Giorgia Meloni travelled to Algiers. There she met with Algerian Prime Minister Aimen Benabderrahmane on Sunday and President Algerian President Abdelmajid Tebboune on Monday. Her goal: to consolidate the economic and political ties between the countries – hinged on energy but rapidly expanding elsewhere.

Meloni’s mission, in two words: while visiting an Italian Navy ship in the port of Algiers on Sunday, the PM thanked the crew for their “extremely strategic work, because we are returning to projecting Italy as a priority in the Mediterranean for its strategic interests.”

A new pipeline… As Rome diversified away from Russia’s gas, Algeria took the latter’s spot as Italy’s top supplier – promising to cover roughly 40% of its overall gas needs – and the two pushed for increased, mutually advantageous cooperation.

… and more gas. Accompanying PM Meloni was Claudio Descalzi, CEO of Italy’s State-controlled energy giant Eni, who noted the Draghi-era agreement with its Algerian partner Sonatrach to increase gas supplies to Italy had been respected.

Energy as a springboard. Italy and Algeria also signed a memorandum of understanding for space cooperation and are committed to expanding their collaborations in the fields of automotive, shipbuilding, tourism, and agriculture, as well as green energy.

It’s strategic. The expanded Rome-Algiers cooperation comes with mutual benefits. Algeria gets increased gas sales and investments to support its transition to renewable power. At the same time, the entente is a consolidation of Italy’s project to become the Mediterranean’s energy hub, linking Northern Africa and the Middle East to the rest of Europe and allowing gas, then green electricity and hydrogen, to flow North.

Also, international politics – and stability. During their talks, PM Meloni and President Tebboune touched upon some of the key dossiers in the Mediterranean area. “Our long chat was an opportunity to talk about the stabilisation of Libya and the situation in Mali, where the instability worries us,” said the Italian PM, who also noted that “only a two-state solution can ensure peace in the region” in reference to the Israeli-Palestinian issue.