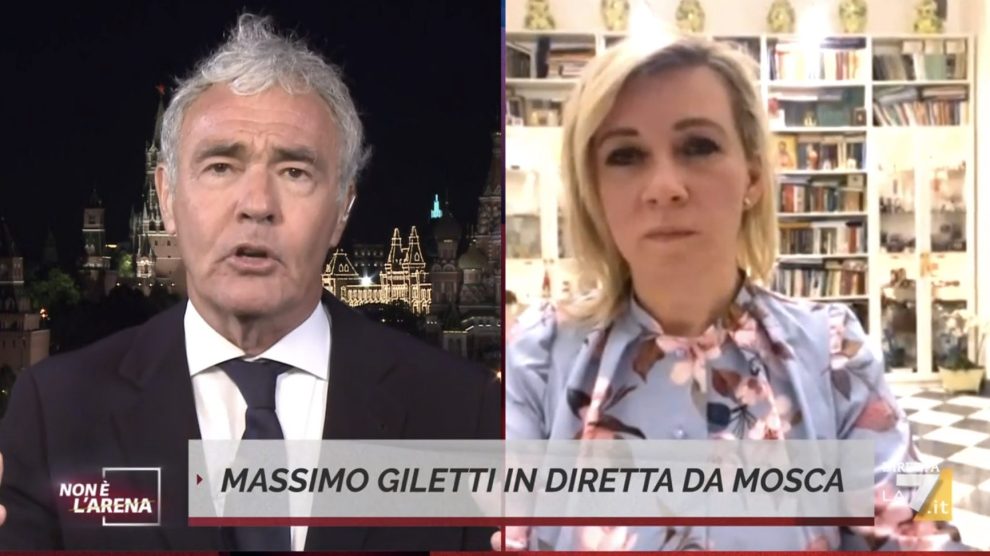 An Italian network aired a prime time show from the Red Square, hosting two of the Kremlin’s most powerful propagandists and marking the pro-Russian depth reached by Italy’s media

From Moscow With Talking Points. The unending barrage of Russian propaganda on Italian TV and (social) media is going full steam ahead. The latest episode (May 5) was aired on La7, a private network, from a special location: the Kremlin’s Red Square.

Worse and worse. The programme was supposed to be a reportage, but it ended up being a veritable spectacle. The interview with Ms Zakharova – who, like Mr Solovyev, is under EU sanctions for supporting the Russian war in Ukraine – lasted more than half an hour. Nevertheless, it looked as if she did not appreciate the media attention, and she decided to disparage her host.

Enough is enough. Alessandro Sallusti, the editor of the daily Libero who was in the Roman studio, abruptly decided to leave the programme as it unrolled – and he strongly rebuked Mr Giletti before disconnecting.

It’s a chronic issue. The Russian propagandists’ show on live TV reignited the Italian debate. Italian TV has become the perfect stage for the Kremlin’s megaphones in recent months, ranging from Foreign Minister Sergei Lavrov to “journalists” working for Russia Today and Sputnik.

Vladimir Putin and his Italian party
Trump investigated over China connection? The FBI’s leak in Rome