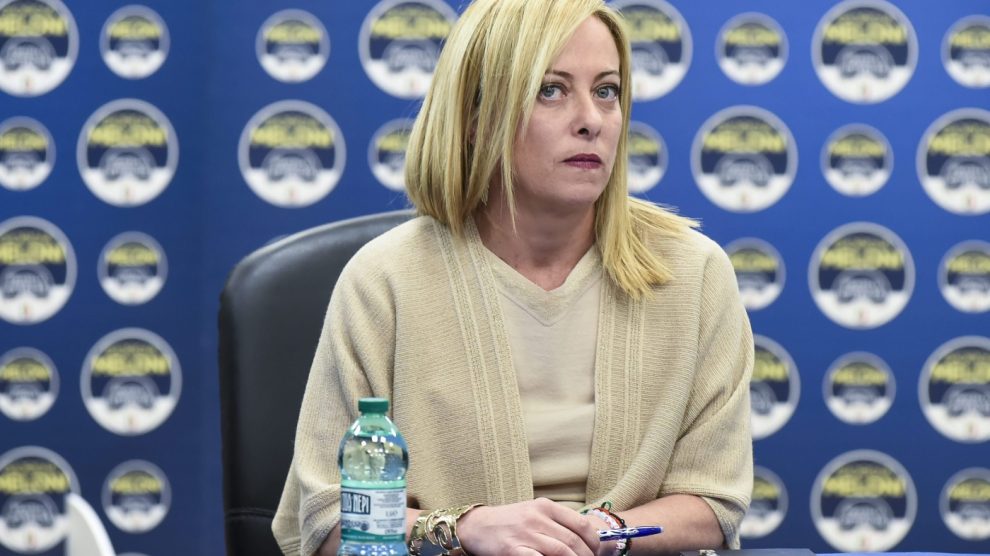 Italy’s likeliest next PM has taken a more moderate turn and seeks to paint herself as a reliable pair of EU hands. But she’s also a rightful member of the international conservative front (which features Trump, Orban and Morawiecki), and her positions might prove hard to reconcile with European unity

A softer Giorgia Meloni? The leader of Brothers of Italy and winner of the September elections seems to be consolidating her party’s conversion into a mainstream conservative force. Communications-wise, she has been campaigning in the name of sobriety, concreteness and trustworthiness, seeking to convince onlookers both in Italy and abroad that she would be a safe pair of hands.

Still, her messaging is not exactly EU-aligned. Ms Meloni doesn’t look set to shake off her longstanding affiliation with hyper-nationalistic and uber-conservative forces, along with the traits they share. In fact, some fear she might retain some of her harder edges and favour them over the moderate, reasonable persona she’s been projecting.

The patriots’ Europe. Ms Meloni pushed the idea of a European Union that’s “more courageous before the great challenges” and “more humble when tackling more local issues, where national policies work best.” She promised to turn her ideas into “concrete policies, as our friends in the Cech Republic, Poland, [Latvia, and soon Sweden].” And ended by saluting “the Europe of patriots.”

An alternative to the left. The next Italian PM said that most EU citizens “don’t recognise themselves in the utopias and ideologies of the left” and “demand that we take responsibility […] We will not be able to do it alone, we will need loyal and reliable fellow travellers, who will stop for once winking at the left and instead help us to organise the alternative to the left.”

Who are her “fellow travellers,” then? That is the question. A good place to start is that very same conference, where former US President Donald Trump and Hungarian PM Viktor Orban also endorsed the Spanish party via pre-recorded videos, while Polish PM Mateusz Moraweicki attended in person.

The expert’s take. Writing on La Stampa, Professor Giovanni Orsina – a well-known political analyst – noted how Ms Meloni “is trying to split into two distinct entities.” The first is “Euro-realist […] putting herself in the wake of Mario Draghi by saying she is ready to participate fully in the European game by negotiating with all countries, starting with France and Germany.” But the second remains “the champion of Trumpian-Orbaninan conservatism.” Her real challenge, remarked Mr Orsina, will be “balancing these two avatars” to prevent one from dragging down the other.

Meloni’s crossroads: is there any point at this stage in pointing the finger at the “Brussels-appointed puppets” when she’s moving from rallies to the leadership of the country? It will be a matter, quite simply, of being realistic and pursuing national interests. Still, working in that direction without understanding her new role might prove a damaging game.